In a rivalry game that’s seen heavy snow, hard hits and exactly two pass attempts in 30 minutes of action, a Navy sophomore’s sprint has made the difference so far. 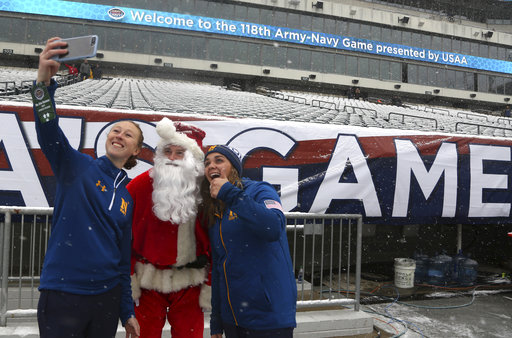 Navy athletic training personnel take a selfie with a security staffer dressed as Santa Claus before the 118th Army-Navy game Saturday in Philadelphia. (Jacqueline Larma/AP)
2 of 12 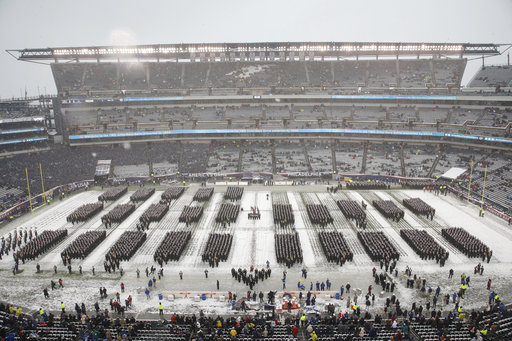 Navy Midshipmen stand in formation ahead of Saturday's Army-Navy game in Philadelphia. (Matt Rourke/AP)
3 of 12 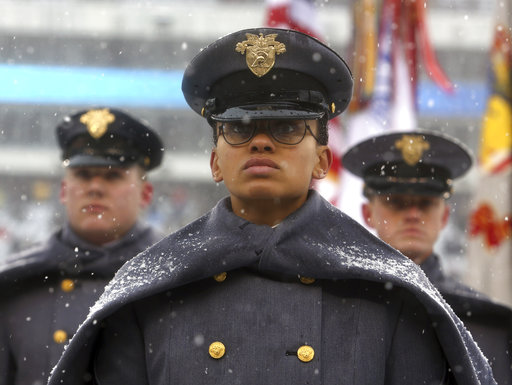 First Captain Simone Askew, the first black woman to lead the Corps of Cadets at West Point, stands in formation as she leads the U.S. Military Academy march-on prior to Saturday's Army-Navy game in Philadelphia. (Jacqueline Larma/AP)
4 of 12 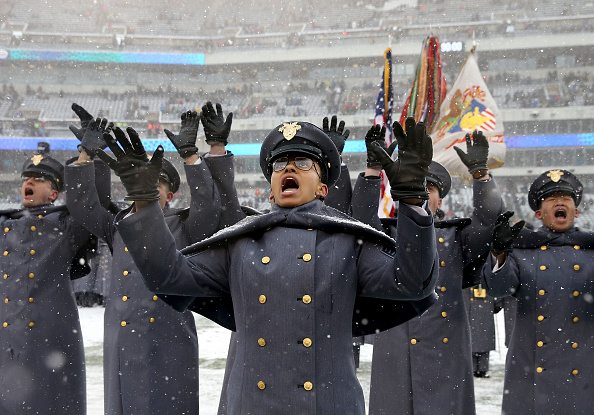 Simone Askew, first captain of the Corps of Cadets, leads the U.S. Military Academy march-on prior to Saturday's Army-Navy game in Philadelphia. Askew is the first black woman to hold the highest student position at West Point. (Elsa/Getty Images)
5 of 12 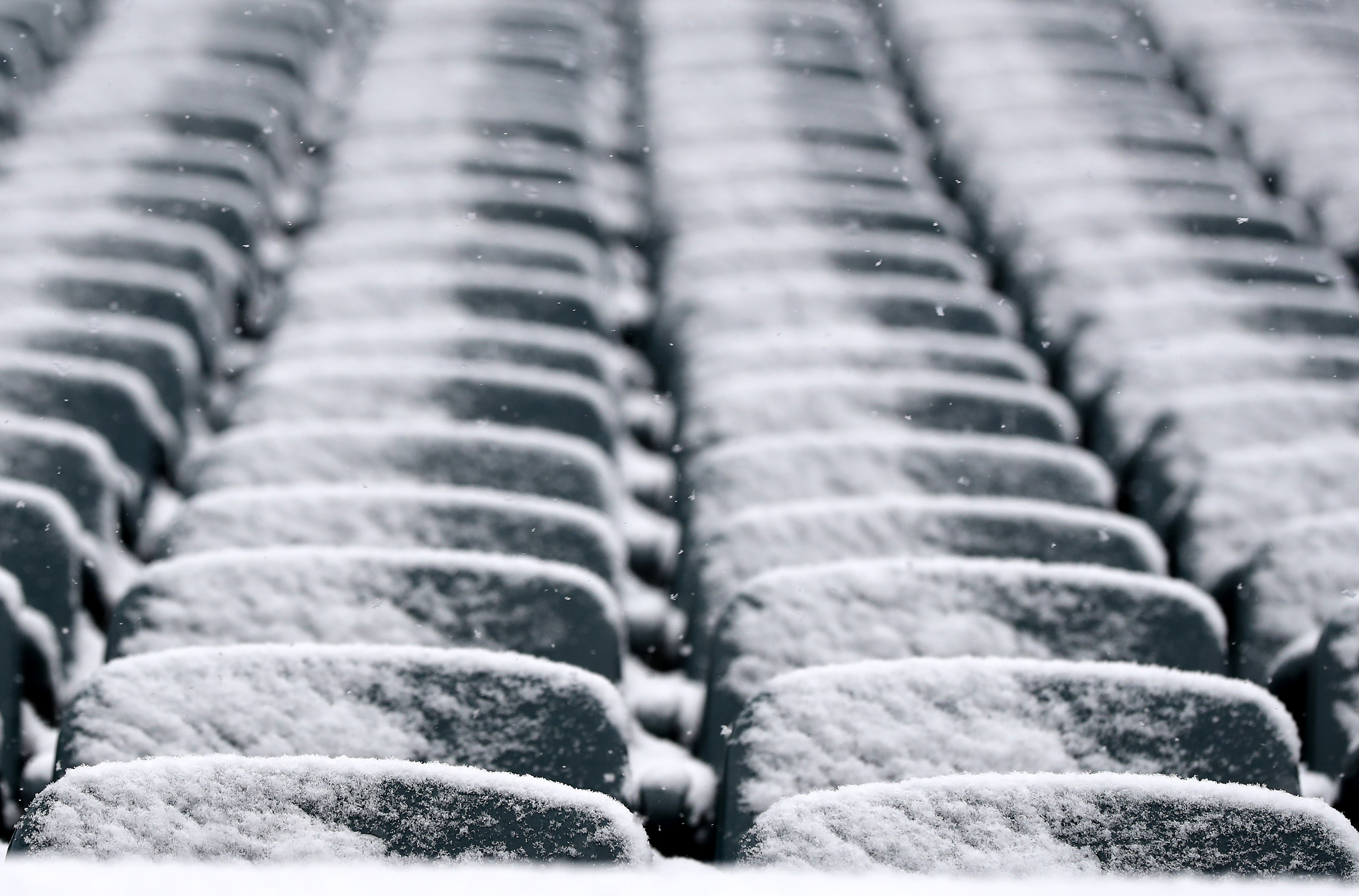 Snow covers the seats before Saturday's Army-Navy game in Philadelphia. (Elsa/Getty Images)
6 of 12 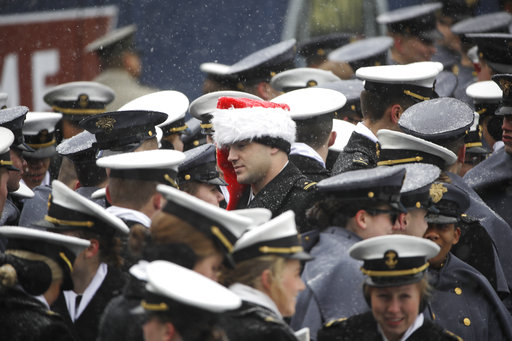 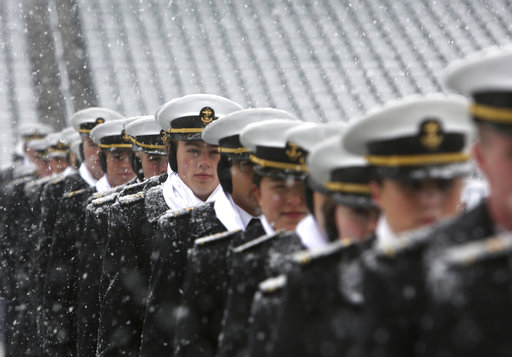 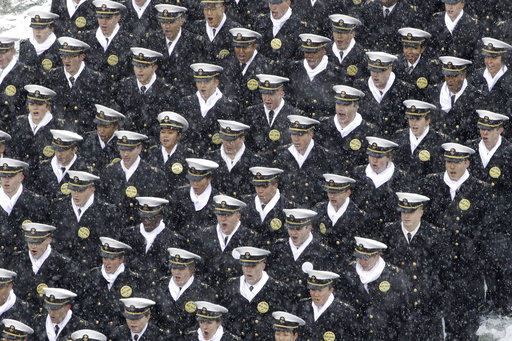 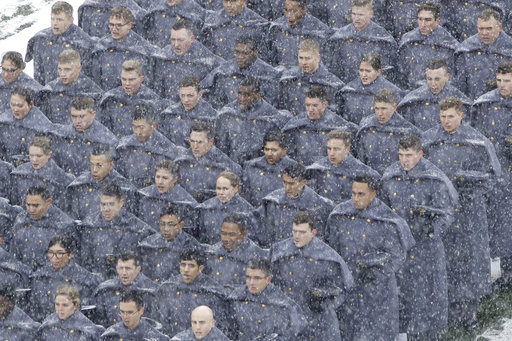 Army cadets brave the snow ahead of Saturday's Army-Navy game. (Matt Rourke/AP)
10 of 12 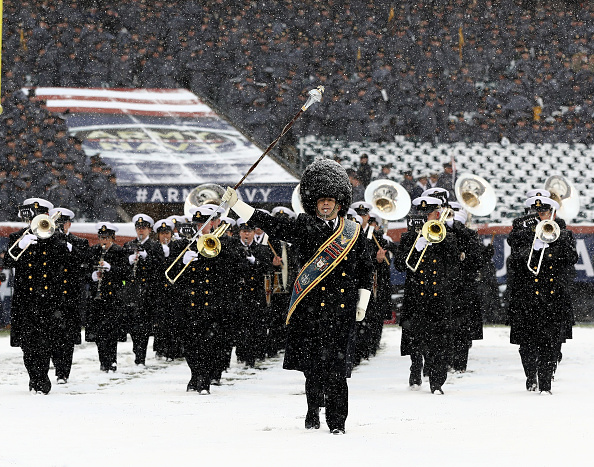 The Naval Academy band takes the field prior to Saturday's game in Philadelphia. (Elsa/Getty Images)
11 of 12 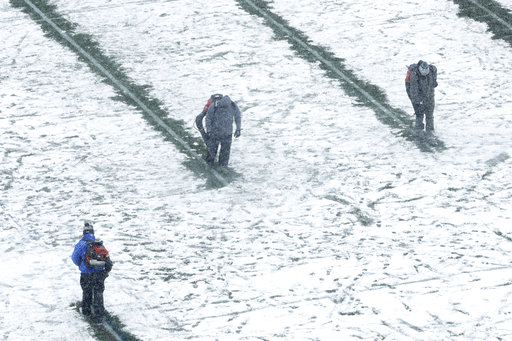 Members of the grounds crew clear lines on the field as snow falls ahead of Saturday's game in Philadelphia. (Matt Rourke/AP)
12 of 12 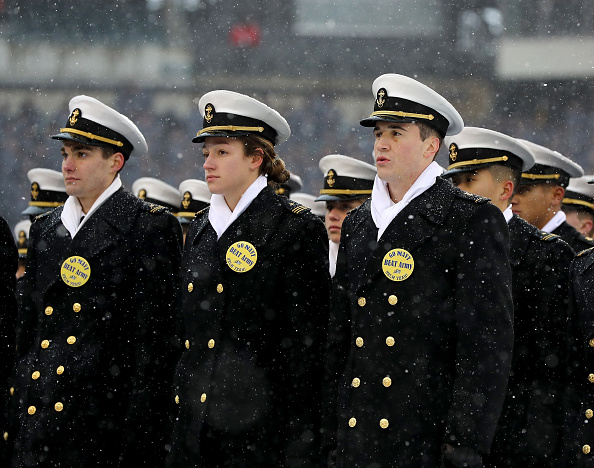 Midshipman Malcolm Perry’s 68-yard score midway through the second quarter rallied the Mids from an early deficit and made the score 10-7, where it stood at the half. Army West Point (8-3) did not attempt a pass, while Navy tried two: One caught for a short gain by Perry (the starting quarterback) and another thrown by a wide receiver.

The Mids will get the ball to start the third quarter in a game dominated so far by long drives: Each team’s opening drive went for more than 10 plays, included zero passes, and resulted in points.

Navy won Secretary of State Rex Tillerson’s coin toss, but the Black Knights, showing no stumbles despite a snow-covered field, struck first. They covered 68 yards on 11 plays, all runs, before junior Darnell Woolfork plunged in from 3 yards out for the game’s first score.

Perry ended some pregame mystery by starting under center for the Mids, then proceeded to rattle off five straight runs to get his team deep into Army territory. Two plays later, junior Zach Abey took over, making a critical fourth-down sneak on his second snap before returning to the sideline.

Three more runs by Perry led to a 4th-and-1 at Army’s 10-yard line. Following a timeout, Navy junior Bennett Moehring nailed a 28-yard field goal despite a high snap (and snowy field) to make it 7-3.

Despite a Navy penalty, Army’s offense stalled early in the second quarter, and Navy took over on its own 26-yard line after the game’s first punt.

Three plays later, Perry couldn’t find an opening on the left of the Navy line, so the sophomore stopped, waited, and saw a gaping hole develop to his right. The Black Knights couldn’t catch him; his 68-yard scamper drew the game’s loudest cheer and put the Mids in front.

Another Navy stop led to a play that generally doesn’t take more than 22 minutes of of game time to reach: The afternoon’s first pass, from Abey to Perry, netted a 2-yard gain. After a timeout, Navy’s creativity went up a level: Wideout Craig Scott took a pitch on an end-around and attempted a pass, missing his target and leading to a Navy punt.

Neither team could score as the second quarter ran out. The run-heavy start wasn’t a surprise: Army and Navy are 1-2 in the Football Bowl Subdivision in rushing yards per game.

A win for the Mids (6-5) would be their 15th in the rivalry’s last 16 games. A win for Army would be the Black Knights’ second straight over Navy and their first rivalry victory in Philadelphia since 2001.