TOKYO — Japanese Prime Minister Shinzo Abe will visit Pearl Harbor with U.S. President Barack Obama at the end of this month, becoming the first leader of his country to go to the site of the Japanese attack that propelled the United States into World War II.

Monday's unexpected announcement came two days before the 75th anniversary of the attack and six months after Obama became the first sitting U.S. president to visit the memorial in Hiroshima for victims of the U.S. atomic bombing of that city at the end of the same war.

Abe, in a brief statement to reporters, said he would visit Hawaii on Dec. 26 and 27 to pray for the war dead at the naval base at Pearl Harbor and to hold a final summit meeting with Obama before the latter's presidency ends.

The White House confirmed a meeting in Hawaii on Dec. 27, saying "the two leaders' visit will showcase the power of reconciliation that has turned former adversaries into the closest of allies, united by common interests and shared values." 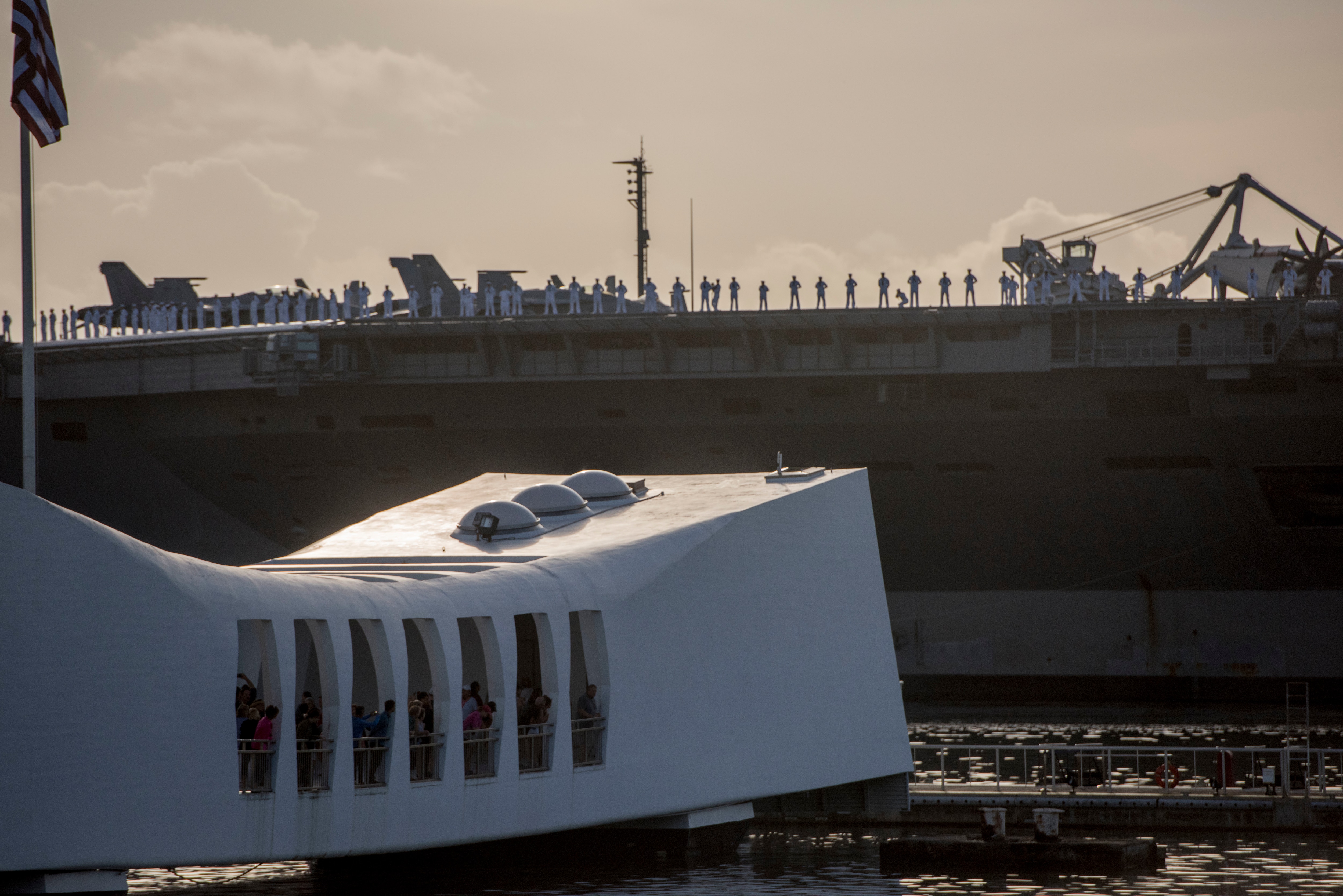 The aircraft carrier John C. Stennis renders honors to the USS Arizona Memorial as the ship prepares to moor at Joint Naval Base Pearl Harbor-Hickam on Friday. The 75th anniversary of the attack on Pearl Harbor and Oahu is Wednesday.
Photo Credit: PO2 Aiyana S. Paschal/Navy
More than 2,300 U.S. servicemen died in the aerial attack, which will be marked Wednesday by a remembrance ceremony and a moment of silence at 7:55 a.m., when the Japanese planes hit their first target.

Three and a half years later, the war came to an end after the U.S. dropped atomic bombs on Hiroshima on Aug. 6, 1945, and on the city of Nagasaki on Aug. 9, 1945. Japan surrendered six days later.

Obama's decision to visit Hiroshima in May divided Americans and was broadly welcomed in Japan. Abe said Monday that Obama's message aiming for a world without nuclear weapons still touches the hearts of many Japanese.

In the seven decades since the war, the United States and Japan have become staunch allies in one of the more remarkable turnarounds of former enemies in world history.

"Our talks in Hawaii will be a chance to show the rest of the world our ever stronger alliance in the future," Abe said.

The announcement of the summit comes as Japan worries about the direction of U.S. foreign policy under Obama's successor, Donald Trump.

There were mixed reactions to the timing of Abe's Pearl Harbor visit.

Together with Obama's visit to Hiroshima, it will complete the reconciliation process and help smooth bilateral relations under any administration, said Tsuneo Watanabe, a senior research fellow at the Sasakawa Peace Foundation. "Historical disputes tend to be brought up when relations become thorny ... but once you put them behind and move on, it makes a difference if there is any negative sentiment in the future," he said.

But Koichi Nakano, a professor of international politics at Tokyo's Sophia University, said Abe's Pearl Harbor visit and his commitment to the Japan-U.S. alliance in the future are tantamount to "giving a blank check to Trump" despite the uncertainty over bilateral relations under his administration.

The president-elect said during the campaign that Japan and other allies should contribute more to the cost of stationing U.S. troops in their countries. About 50,000 American troops are based in Japan.

Abe met with Trump in New York last month. He wouldn't disclose details, but said that Trump is a leader he can have great confidence in.