It was August 24, 1944. Then-1st Lt. McGee and 51 other pilots from the 332nd Fighter Group — the first and only unit to allow black airmen to fly in World War II — took to the sky in their distinctive red-tailed P-51 Mustang fighters. Their mission: Escort B-17s from the 5th Bomb Wing on a mission to strike Pardubice Airdrome in Czechoslovakia and the rail yards nearby.

"The [German] fighters tried to penetrate the bombers we were escorting, and my element was designated to chase them off," McGee said in a May 17 interview, wearing the distinctive bright red Tuskegee jacket that represents their planes' iconic red tails. "He took a dive for the ground, and fortunately, I was behind him. He made a turn that put him right in my gun sights. And that was it."

At a time when black people still faced segregation in the United States, and many felt black people didn't have what it takes to fly, the Tuskegee Airmen proved them wrong. They became known and respected for their exceptional fighting skills as they escorted bombers over Europe, and their example helped lead the Air Force, and then the rest of the military, to fully desegregate beginning in 1949.

The Tuskegee Airmen are a central part of Air Force history, and the subject of numerous books and movies. But when McGee and three other Tuskegee Airmen — Pvt. Major Anderson, a mechanic, and cadets William Fauntroy and Walter Robinson — gathered at an event hosted by the Air Force Academy Society of Washington, D.C., they reminisced with the easy camaraderie of old friends. 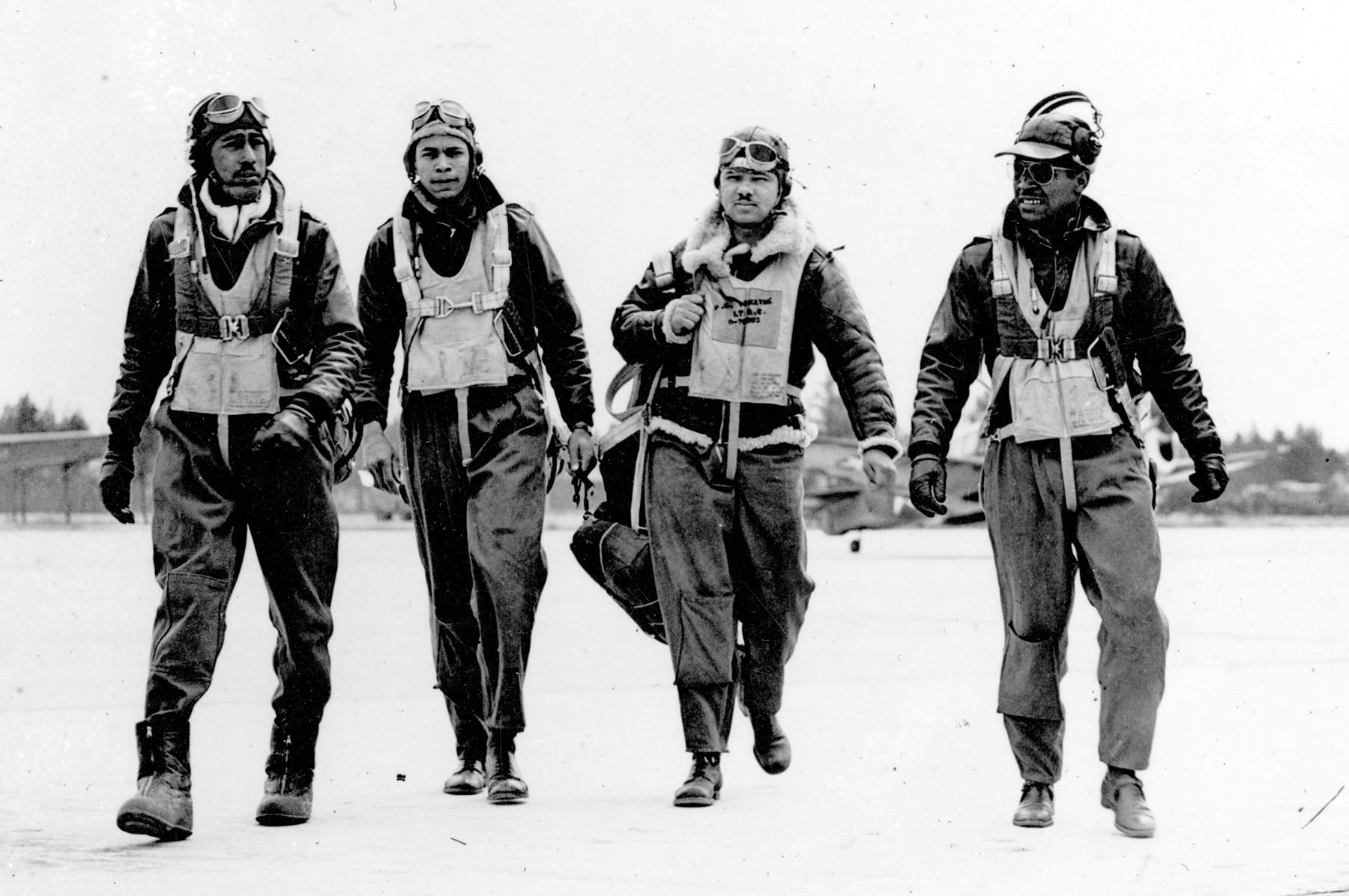 The legendary Tuskegee Airmen are an integral part of Air Force history.
Photo Credit: Air Force
Fauntroy — who jokingly called himself "the baby of the bunch" — signed up for the Army Air Corps Reserves at age 17 in 1944.

"I was the most surprised person on the base when I found out I had passed and was going to Tuskegee," Fauntroy said.

McGee said he was an ROTC student at the University of Illinois when he learned about the flying program, and though he had never been around an aircraft, an ROTC instructor encouraged him to apply. In October 1942, 10 months after he took the exam, McGee was called up and started training at the Tuskegee Institute.

Training was a good experience, McGee said, and by the time he got to Europe, he felt Tuskegee had properly prepared him for the job. Charles Alfred Anderson, a trailblazing black aviator, was the first flight instructor at the Tuskegee Institute and taught all the airmen there.

"They didn't drop the standards, even though they didn't think we were going to be successful," McGee said.

He and his fellow airmen flew P-40s, P-39s and P-47s to support ground forces in Italy, before switching to the P-51 to help guard the vulnerable bombers on their missions. The P-51 was McGee's favorite, and he dubbed his Mustang "Kitten."

But when four groups of fighters — three of which were not Tuskegee airmen — started flying bomber missions, McGee said the B-17 and B-24 gunners needed some way to distinguish between friendly escort planes and enemy planes in the heat of battle. So they started painting their tails — one group of escort fighters had yellow tails, another had red-and-white candy stripe tails, a third had a black-and-yellow checkerboard pattern, and the Tuskegee fighters from the 332nd had red tails.

"That term has stuck with us since then, because many of the bomber pilots did not know that the Red Tails were black pilots," McGee said. "See, segregation went overseas at that time as well. We were trained well, we were prepared for the opportunities, and although we were segregated, fortunately the record we established helped the Air Force ... to say, 'We need to integrate.' We accomplished something that helped lead the country. We didn't call it civil rights. It was American opportunity."

'In love with the flying'

McGee said the Red Tails always waited for the order to peel off from their bomber and pursue a German fighter.

"That's the way we operated," McGee said. "The leader would designate. We didn't just leave the bomber because we saw German aircraft. If they were attacking the elements that we were escorting, then we would dispatch a unit to fight them off."

Their interdiction and ground support missions were very different from the bomber escort missions, McGee said. He saluted the bomber pilots, because they had to fly through the heart of the flak to reach their targets. McGee and the other P-51 pilots could fly above the flak and still get the job done, he said.

McGee said the airmen also conducted "fighter sweeps" to destroy enemy planes before they even got their propellers spinning.

"We probably destroyed more German aircraft and facilities on the ground than we did in the air," McGee said. "Those were fun times. ... I happened to be in love with the flying."

Staff Sgt. James McGee, shown working on one of the 332nd Fighter Group's P-39 Airacobras in Italy, kept their aircraft combat ready. Mechanics like McGee are credited with keeping the aircraft in the air and helping the pilots maintain their confidence.

The war ended before Fauntroy had a chance to be deployed. But the combat veterans who came back and instructed Fauntroy in aircraft like the AT-6 Texan trainer taught him well, he said, and if he had been deployed, he was sure that he would have been ready.

Robinson saluted mechanics like Anderson for keeping the planes in the air and keeping pilots confident.

"If you didn't love your mechanic, you didn't understand what he was doing for you," Robinson said.

Anderson said there were about 15 support personnel for each pilot — everything from mechanics to cooks to quartermasters to nurses and others. When United States entered the war in 1941, Anderson was a 16-year-old high school student. When he turned 18, he registered for the draft and was called up three months later.

After basic, he went to occupational school for about four or five months and learned to be an aircraft sheet metal repairman, patching up bullet holes in B-25 Mitchell bombers.

He was assigned to the 477th Bombardment Group, a primarily black unit that was being trained on the B-25, but the war ended before its training was finished, and it did not deploy. Anderson was honorably discharged in 1946.

But although the 477th — the last Tuskegee unit formed — never went to war, it played a major role in fighting racism in the military, McGee said.

In March 1945, the 477th moved to Freeman Field in Indiana. One month later, the base's leadership adopted a rule limiting where trainees could go, which effectively prohibited black officers from entering the main officer's club. In an incident that became known as the "Freeman Field Mutiny," black officers peacefully repeatedly attempted to enter the O-club. Sixty-one were arrested.

On April 9, 1945, Col. Robert Selway, commander of the 477th and the base, issued regulations mandating separate O-clubs, mess halls, quarters, latrines and recreation facilities. Of the 422 black officers there, 101 refused to sign, in defiance of Selway's orders, and were arrested. They were later given written reprimands and released. Three others were court-martialed, and one was convicted. Fifty years later, the Air Force vindicated those airmen, removed the reprimands from their records, and exonerated the one airman convicted in court.

McGee said he believes the Air Force and other military services are continuing to make progress towards equality and are providing more opportunity for black and minority service members.

But today, top Air Force leaders remain concerned about a lack of diversity in the ranks of pilots and other key career fields, and the service is rolling out a slate of programs designed to improve opportunities for female and minority airmen. Former Vice Chief of Staff Gen. Larry Spencer, who is black, said last year he finds it "dismaying" to see young black students considering the military often don't consider the possibility of becoming pilots.

That's a tough problem to fix, McGee said. He believes the nation needs to do more to improve its schools — he's particularly worried the nation's education system isn't keeping up with the rapid pace of technological advancement — and the military needs to focus on training minorities and women to fill these crucial jobs that lack diversity.

"That's the only way I see us getting away from the trend of saying, 'Well, there aren't enough women, there aren't enough minorities, there aren't enough Latinos,' or you name it," McGee said. "Focus on their training at the right time, long before you want them. It's got to start before they're 18, and we need to pay attention to that if we're going to improve the future, that all are represented equally in whatever endeavoring field."

Seven decades later, the Tuskegee Airmen still feel pride for the role they played both in helping win the war, and in making their country better.

"It was said, 'You couldn't fly,'" Robinson said. "This just didn't happen. [However,] we were not only prepared, but we could excel in what we were doing. There was no time that I wasn't proud of the people around me."

"What did the Tuskegee Airmen accomplish?" McGee said. "We dispelled the biases and generalizations and racist thoughts that had been part of Army policy. It all came from a basis of doing something for our country."

Stephen Losey is the air warfare reporter for Defense News. He previously covered leadership and personnel issues at Air Force Times, and the Pentagon, special operations and air warfare at Military.com. He has traveled to the Middle East to cover U.S. Air Force operations.

Cosmas D. Eaglin Sr. was recognized for his years of dedicated service across three military conflicts.

No U.S. troops or civilians were harmed in the operation.

How Area 51 became a hotbed for conspiracy theories

The conspiracies about aliens out of Area 51 began more than 75 years ago.

Defense lawyers worked to sow doubt about the prosecution’s theory that former Green Beret Rick Rodriguez died because of his head injury.

Department leaders say the are confident the increases won't lead to longer wait times for appointments.