Visiting an Army base in Virginia, President Barack Obama offered a detailed rationale for his decision to allow women to serve in combat career fields, saying the new policy is making the military stronger despite concerns about the impact on individual combat units' readiness and performance.

"As a consequence of women serving in our military and opening up what used to be closed situations to them, we've gained a lot of talent," Obama said, suggesting a positive impact on recruiting and retention of women.

Obama spoke Wednesday during a town hall-style event at Fort Lee in Virginia. His remarks about women in combat came in response to a question from a female Marine officer who voiced concern for her husband, a Marine infantry officer who may be assigned to a gender-integrated combat unit. She specifically cited a Marine Corps-sponsored study that found women in combat units suffered higher rates of injury and integrated units required more time to execute evacuations.

"That added time can mean a difference between my husband living or dying," said Capt. Lauren Serrano, who earned a Bronze Star in Iraq. "Why were these tangible negative consequences disregarded? And how does the integration of women positively enhance the infantry mission and make me and my husband safer?"

The Marine Corps was the only service to voice top-level concerns about combat readiness when the Pentagon formally lifted the ban on women serving in combat arms in March.

"I don't think any studies are going to be disregarded. I think that what we have to do is to take a look at the particular deployments, the particular situations. There are going to be situations in which women are on the front lines. And they're doing a bunch of stuff now. Sometimes we can call them combat or not, but the truth of the matter is, they're in a war theater and they are at great risk," he said. 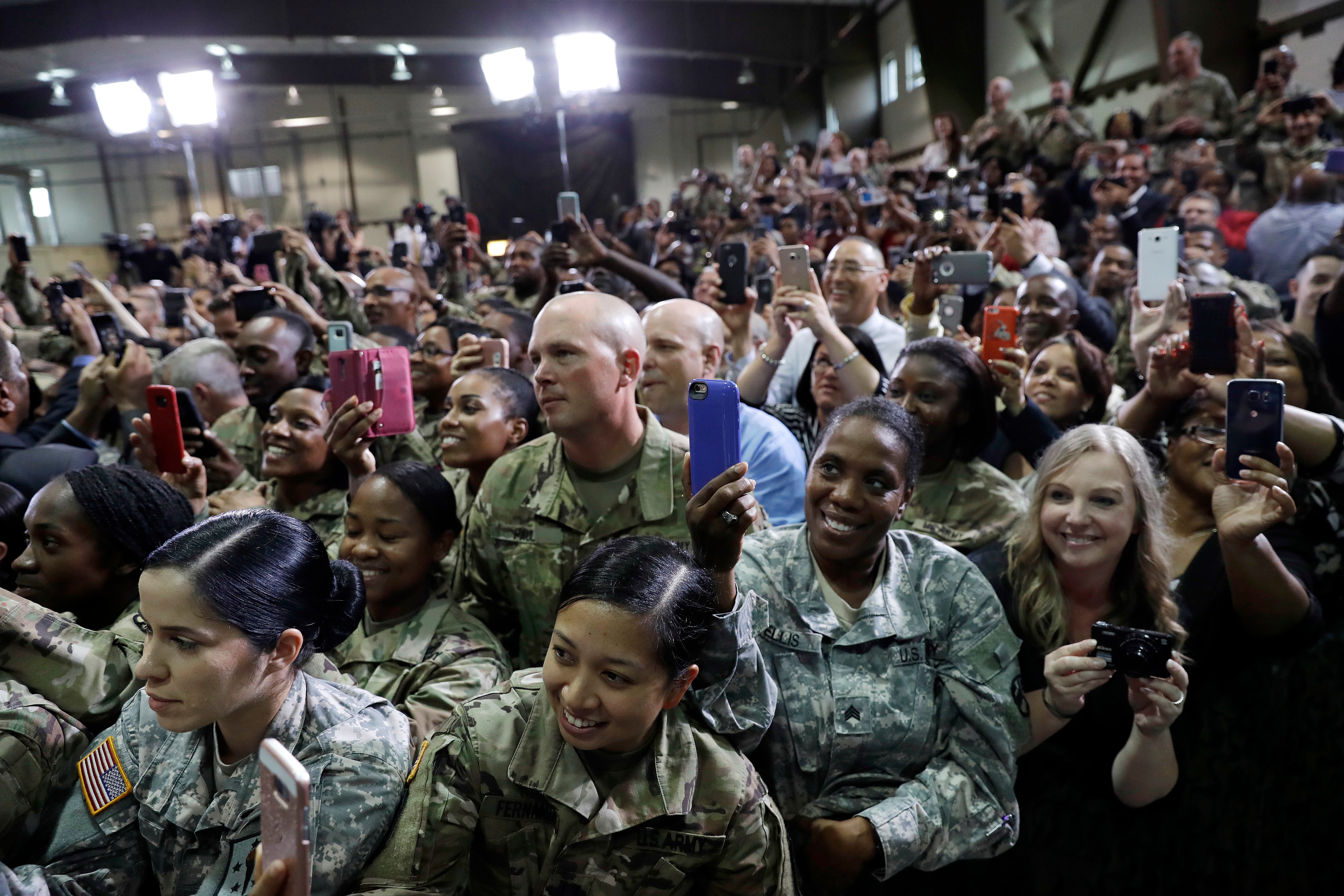 Troops watch President Barack Obama speak to members of the military community Wednesday in Fort Lee, Va. (Photo: Carolyn Kaster/AP)
Obama appeared to acknowledge that there may be appropriate times to exclude women from some missions. "There are going to be other situations in which the commanders in the field have to make decisions about what's going to be best in order for us to accomplish the mission," Obama said.

But he also said not all combat jobs involve "going door-to-door in Fallujah."

"There may be situations in which they could do the best job," he said.

"It may not involve physical strength or how many pull-ups you can do. It may involve the precision with which you can operate and you being able to keep your cool and you being able to carry out a task with a low error rate. And it may be that in those situations a woman can perform better than a man," he said.

The change in policy opened up more than 200,000 military jobs that were previously closed to women, who make up about 15 percent of the active-duty force. It was fueled by claims from women that the restrictions limited their ability to ascend to the military's highest level of leadership, which is often filled with officers who served in the combat arms.

It also came after 15 years of counterinsurgency operations that made official gender restrictions referencing "ground combat" seem out of step with missions targeting a shadowy enemy that used nontraditional, asymmetrical tactics.

The Pentagon leadership's final decision to lift all gender restrictions also may have been influenced by a pending lawsuit from several former female service members who claimed the combat exclusion rules violated their constitutional rights.

The president rejected the suggestion that his decision was an effort to be "politically correct."

"This isn't some symbolic issue. This is: Let's make sure that we're not fielding half a team. If we've got a whole team, let's figure out who can do what and who can do it best," he said.

"And if they can do it best, I want to make sure they've got opportunities," he said.

In saving a Peruvian wildcat, this soldier learned how to save himself