If you’re interested in what it was really like on the streets of Bagdad during the early days of the Iraq War, there’s a book you might want to read.

It’s not some tell-all memoir or weighty strategic post-mortem. It’s a fictional murder mystery written by a former CIA agent.

And it happens to be a new comic book series.

"The Sheriff of Babylon" is a gritty window into a confusing time in a violent place.

Author Tom King describes it as a chance to peer into the head of someone who was in the thick of it then — and trying make sense of it all now.

Comic book fans probably already know King’s name, or at least his work. He’s was a co-writer for DC Comics’ Grayson series as well as the relaunch of the Omega Men. Most recently he was picked to pen a rebooted Batman series.

It’s all part of the reboot of his own career. He left the CIA after spending seven years as a counterterrorism agent roaming the war zones in and around Iraq and Afghanistan.

Illustrated by Mitch Gerads and published by DC imprint Vertigo, King describes ​the series is a kind of mature-audiences-only comic book version of an HBO series, King says. Issue No. 9 of the series is hitting shelves.

"The plan currently is to go 65 to 75 issues. The first season will end with issue 12 and after a short break the story will pick back up."

For those who want to catch up on the series, a new graphic novel compilation of the first six issues — "Sheriff of Babylon: Bang. Bang. Bang." — is your chance to binge-read the first half of the first season.

The series is inspired by King’s experiences working in Iraq a counter-terrorism agent ​in early 2004, as the invasion to oust Saddam Hussein and search for weapons of mass destruction was shifting into an occupation of the country and hunt for newly arriving terrorist elements. 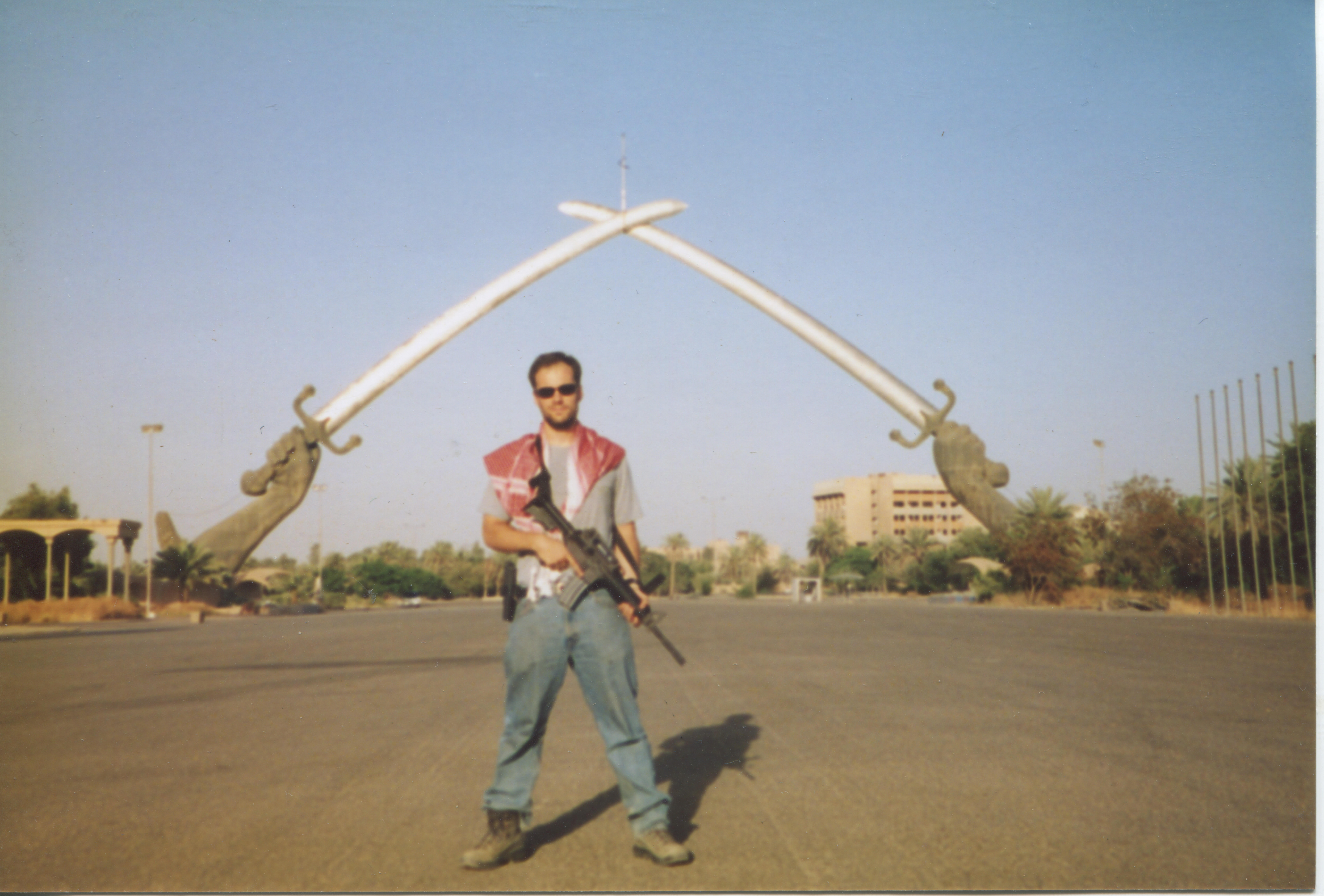 Former CIA agent Tom King is shown in Iraq in 2004.
Photo Credit: Courtesy of Tom King
"I wanted to tell a story that was about Iraq but wasn’t the politics of it or looking for WMDs and all that sort of BS," he says.

Instead, the series drops the easy good guy/bad guy storylines found in so many comics to delve into a more nuanced world he hopes will ring true to those who served there.

There’s not much he can say about what he was doing then, but he describes his job as "finding the guys you could talk to who knew the guys you wanted to kill."

But Sheriff of Babylon is no spy thriller.

Indeed, says King, "I couldn’t do a spy story because they wouldn’t let me," referring to CIA rules on former agents telling even fictional accounts that cut too close to home.

So instead, he turned his story into a murder mystery told through the eyes of an American cop turned military contractor.

He’s in the country to train a new Iraqi police force, and one of his recruits has just been murdered. With civil authority in tatters, even as the body count continues to grow, the cop now is the only person in the Green Zone with any interest in finding out who killed him — and why. 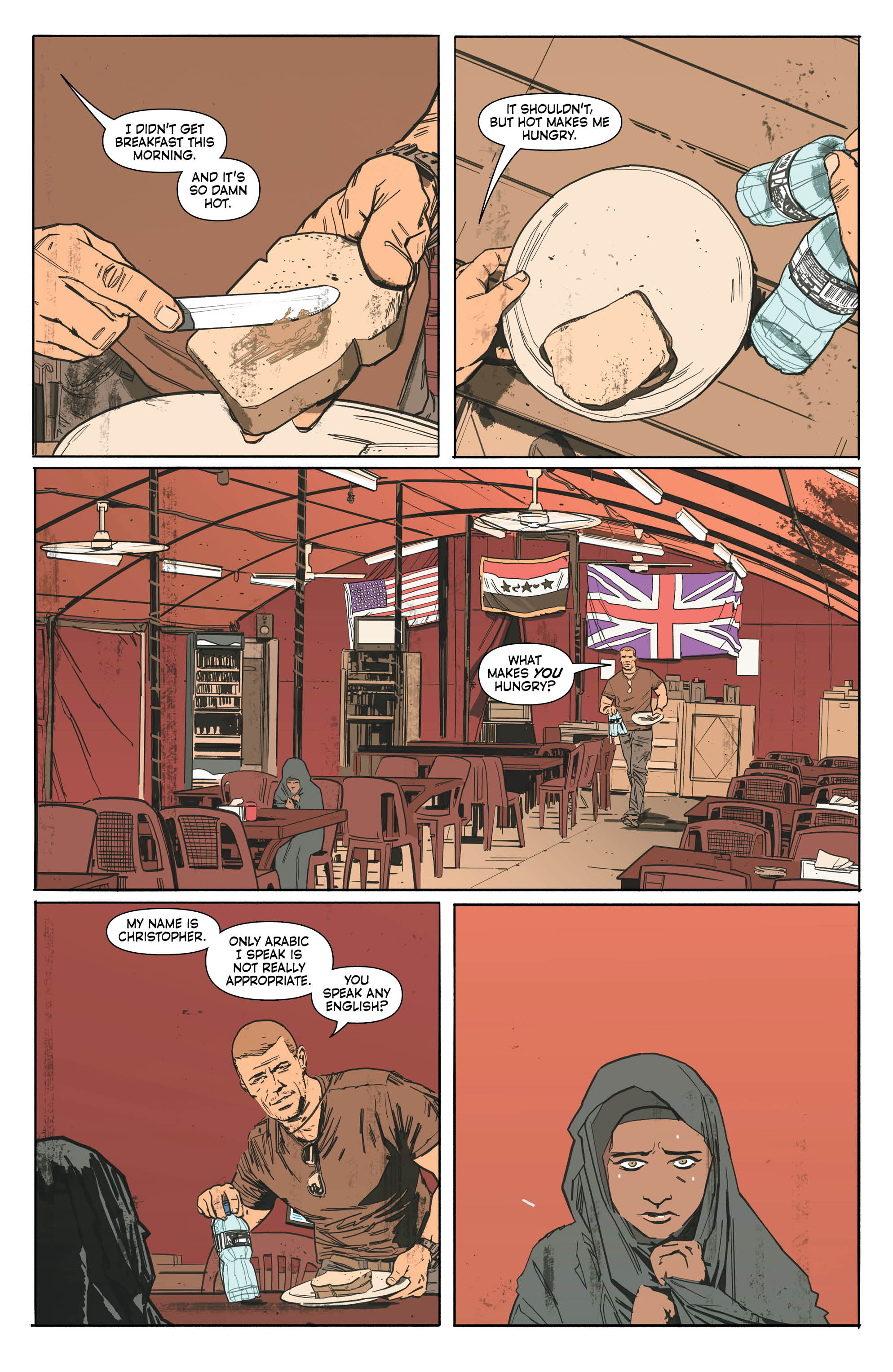 The CIA declined to comment on whether "The Sheriff of Babylon" is the first comic book required to undergo a security review.
Photo Credit: Courtesy of Vertigo

"Iraq seems like a simple story at first — Saddam is a bad guy. We take him down. We win," King says.

"So, I wanted the murder mystery to start that way, with people trying to solve one little thing but that it evolves and expands beyond the control of the people doing it. So the crime story becomes a metaphor or an analogy for that time in the war when we went from everything is going well, we’ve got this under control, to we can’t control this at all."

King says he hopes Iraq veterans will recognize much of what they see in the series.

"I hope they get some authenticity from it, that it feels like the places they’ve been, not some Hollywood version of it."

Indeed, he says, with the exception of one place depicted in the series, "every location is somewhere I’ve been."

Because he was a CIA employee, each issue must be vetted by the agency to make sure no classified information is divulged.

"I’m afraid every time they’re going to arrest me," he says with a laugh. "Military people know better than most, a lot of the fight is the bureaucratic fight. Some of it is guns, but a lot of it just bureaucracy. But as a bureaucratic process, this has been pretty smooth."

Still, he says cryptically, "there are so many stories about that process I wish I could tell, but I can’t." Instead, he’ll only add with another laugh, "we’d never want the enemy to know where our paperwork goes."


He says he’s not sure who even does the review. "I feel like the more I ask the more trouble I may get in, so when they say yes, I just go forward."

Regardless, he says he hasn’t had pushback on any of his work.

"I feel very responsible for the secrets I was charged to keep. And do believe those secrets protect people’s lives to this day. So, I know not to put those into the script. I try not to get anywhere near that line. I don’t write about sources or methods. I don’t write about actual people I met or saw."

A CIA spokesman declined to comment on whether "Sheriff of Babylon" was the first comic book required to undergo a security review by the agency.

Even more than a decade later, King says Iraq remains an enigma to him.

"Beyond a few good questions, I don’t think I understand Iraq. I don’t have the arrogance or the knowledge to say this is what it was about and this is not what it was about. At least in my conscious mind," he says.

"That’s why I’m telling this story. Maybe the audience and I can approach this thing together and through a story we can find that kind of thing. I don’t want there to be a message, like you can figure out my philosophy on Iraq by reading this book. I want people to read the story and come to their own conclusions about it."

Could Guard troops get free TRICARE? This state might become the first

The state would spend around $5 million per year to reimburse premiums under the plan.

The soldiers were treated and released at nearby hospitals, according to the Army.

The objective is to boost the combat effectiveness of Navy explosive ordnance disposal units in environments similar to the Arctic.

US military failed to detect previous spy balloons from China

Navy and Coast Guard ships are surrounding the wreckage from Saturday, working to recover debris.

The service has released video of the Feb. 3 rescue of a mariner off Oregon's coast.

US military failed to detect previous spy balloons from China

13 thoughts China’s balloon (probably) had while floating over America